I recently wrote another article about working remotely in Iran. Entitled: Calling all Digital Nomads – This is Why Iran is the Best Place to Work Remotely, I posted it on a Facebook group for Digital Nomads. I asked the group members whether they would consider working remotely in Iran. The responses I received were wide and varied. Let’s just say it was quite a controversial post that kept my phone buzzing with notifications for more than a week.

In this latest post I have tried to shed light on some of the issues my Facebook peers considered barriers to working and living in Iran. I understand these common misconceptions do not get created out of thin air- Iran does have its fair share of problems. But I would urge digital nomads to look beyond the common rhetoric. Take the opportunity to experience the best working holiday of your life filled with fun, adventure, beauty, sorrow and wonder. Where? In Iran.

Locals use a mosque in Kashan for a social volleyball game


Iran is a safe place to live and Tehran is especially safe. There is virtually no gun violence and very little violent crime. To give an example, the US has 12 times more gun violence than Iran. Iranian’s absolutely love foreigners so tourists are very unlikely to be victim of a crime. The below graph taken from Numbeo backs up my statements.

Iranians can read the news too so they know that there is a belief that Iran is unsafe. As such, the Iranian government has recently introduced a special dedicated police force to assist tourists. These guys are hanging out at all the major tourist spots and can help you if you are lost or feel unsafe for any reason. Most officers speak Farsi, English and usually another language such as French or Arabic.

But maybe you’re thinking about the bigger picture. What if something major happens, like WWIII? Well, nobody knows for sure but let’s not forget that the US Iran conflict has been ongoing for more than 40 years. 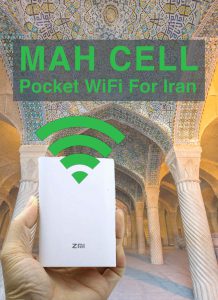 This is a big one for the Digital Nomad community. WiFi and mobile internet speeds are always increasing in Iran. Last week in the MahCard Tehran office we tested the speed and it was 35mbps. In rural areas internet is slower. In 2017 average national internet speeds increased by 36% to an average of 16.74mbps. Read: Three ways to access internet in Iran for more in depth information.

Public Wifi is not that common in Iran. But not a worry! For 15 EUR a week you can have unlimited 4G mobile internet provided by MahCell. Read more here: Rent a Pocket WiFi for Iran | Unlimited Data.

Another perceived barrier is restricted web browsing and access to software. These are valid concerns but by using a good VPN you can get around these issues.

Due to sanctions, Iran is cut off from international money systems. This means that 99.9% of the time, you can’t use MasterCard and Visa cards in Iran. Travelers have the option of carrying cash or getting and Iranian travel debit card. You can apply for a tourist debit card with MahCard. The fees are super low and you can recharge online. Read more here. 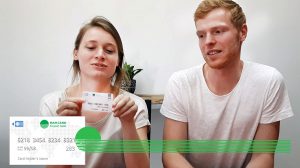 
Iranian food is fantastic. It is the perfect mix of Middle Eastern and Western Asian flavors. The food is not too spicy and not too bland. There is a huge variety that changes depending on the region.

Typical food is rice and stew or rice and BBQ meat (kabab). Absolutely delicious fresh fruits and vegetables are available all year round. For more on Iranian food read: Best Iranian food: an introduction for the fans of food tourism.

Can you have fun in Iran?


Of course you can! Everyone who’s actually traveled to Iran would agree. In the New York Times article In Iran, They Want Fun, Fun, Fun the author recounts stories of his travels through Iran meeting young Iranians and discussing their interests.

Because there aren’t any bars or clubs people look for entertainment elsewhere. Rather than going to a bar, young Iranians frequent the theater, see live music, hang out in a buzzing cafe or shop at the night markets.  There is outdoor fun too. You can go rollerblading, skiing, bungee jumping, zip lining and rock-climbing in and around Tehran.

If you are invited to a party, don’t be surprised if the guests are drinking alcohol, the ladies are scantily clad and everyone is flirting and dancing together. Believe it or not, this is normal in Iran.

Not sure how to have fun in Iran? Read our guide to Tehran’s nightlife: How to have fun at nights in the crowded capital city of Iran .

This is a weird one. Many people are under the impression that Iran is backing ISIS or vice versa. Truth be told, the Iranian regime is a totally separate branch of Islam to ISIS and has actually been fighting against ISIS in Syria and Iraq. Still not sure? Check out the Wikipedia page Iran and ISIL.

In recent years the Iranian government has been taking steps to increase the number of tourists coming to Iran. Almost 8 million tourists visited Iran in 2018, which was a 52% increase from the previous year.

As economic and oil sanctions by the Trump administration cripple the Iranian economy, there has been an effort by the government and the Iranian people alike to look within to bolster their economy and create sustainable livelihoods. The local tourism industry is “unsanctionable” according to governmental experts.

In a further attempt to encourage tourists Iran has stopped stamping incoming visitor’s passports. As a tourist, your contact with government officials will be quite limited. In my experience police and border control staff have always been hospitable and friendly. 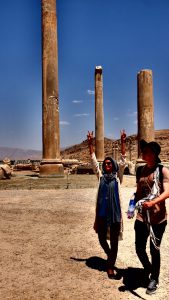 Is it difficult to get a visa for Iran?

For British, Canadian and US citizens it is a little bit difficult. These guys need to apply for a visa in advance and must be accompanied by a tour guide during their stay. You can read more about that here: Travel to Iran as an American, British or Canadian. For Europeans, Australians, New Zealanders and many other places you can apply for a 30 day tourist visa on arrival at the airport.

Does anyone speak English in Iran?

I was surprised to find out that Iran does not rank very highly in English Proficiency ratings, being ranked 66th from 88 countries. With this said, Iran is the second highest ranking country for English speakers in the Middle East.

In my experience it is very easy to get by in Iran without speaking Persian. Taxi drivers, hotel staff, shopkeepers and flight attendants all speak at least a little bit of English. Most of the time waiters will bring you a menu written in English. To help you along more, all street signs and food labels at the supermarket will be written in both Persian and English.

In the bigger cities like Tehran and Esfahan there are tonnes of English language schools and it is trendy to speak and learn English. In these places tourists will find themselves fobbing off the advances of locals who are eager to practice their English and want to help you.

Do women have any rights in Iran?

Okay, so obviously Iranian women do not have equal rights to men, Islamic law makes sure of that. 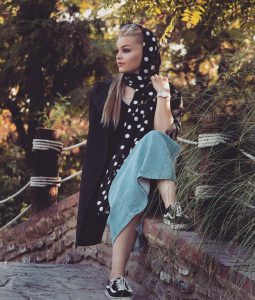 Typically dress of a Tehrani girl

But the state of women’s rights in Iran is not as bad as you might think and is undoubtedly better than almost all countries in the Middle East.

Iranian women can drive, vote, work alongside men, own property, control their own finances, choose who they marry and live on their own. These things are not reserved for the upper classes but are the reality of most Iranian women.

“It used to be that a woman would marry and she would just have to get along. Now if she’s not happy, she’ll separate. It’s not taboo”

One aspect where Iran stands out to be limiting the freedoms of women is the hijab. All women must wear Islamic cover in public. This means modest, long clothing and a headscarf. Many women test the boundaries and do not take hijab so seriously. Just go on Instagram and search #tehran or #iraniangirl #tehranfashion to see for yourself.

For more details on cost of living, renting an apartment and co-working spaces, see this post.

Alison is an Australian writer and artist. After falling in love with Iran during a holiday, she decided to stay. Alison now lives between Tehran and her walnut farm near Isfahan. Alison has travelled widely across Iran, including a mammoth 3,000 kilometer road trip from Tehran to the Persian Gulf in February 2019. She loves exploring Iran’s wilder areas like the forests of Gilan and the Grand Bazaar of Tehran!