Most beautiful places in Iran: a list of must-see places for almost everyone

Most beautiful places in Iran

People choose every trip destination for a reason such as glorious landmarks, spectacular nature, special culture, and etc. Iran has them all! The country has various landmarks and natural wonders due to its history and geographical status. So it has something to offer for almost everyone, no matter who they are and what they like. Moreover, Iranian people have a high sense of hospitality, especially in borderline cities and villages. In addition, the new payment system in Iran, Mah Card, makes things much easier for tourists. Mah Card is an Iranian prepaid debit card designed for tourists and temporary visitors. These qualities make Iran a perfect destination, despite what most people think based on international propaganda and political decisions. Limited time and variety of the must-see places in Iran makes your decisions more delicate and strategical. So in order to make better decisions, you should know your fields of interest and then you should start planning. We have tried to provide a list of the most beautiful places in Iran, which includes almost famous historical and natural places. The list can also help you to realize the variety of your choices in Iran and match them with your fields of interest while every mentioned place is a sample of a type.

Badab Soort is a natural site consisted of two separate mineral springs that have made a step-like landform by their flow during thousands of years. The whole area is red, orange, and yellow because of the mineral deposits. It’s one of the most beautiful places in Iran located in Mazandaran province, 95 kilometres (59 mi) south of the city Sari, and 7 kilometres (4.3 mi) west of Orost village. It is recorded as the second saline water spring in the world after Pamukkale springs in Turkey. one of the best times of the year for visiting Badab Soort is April because of the spring’s beautiful natural landscape.

Chogha Zanbil is a historical site in the Khuzestan province, close to Susa (30 km or 19 mi away). It is a temple remained from an ancient city named Dur Untash which dates back to Elamite era, 1250 BC. The temple was about 52 meters high and included 5 floors, but only 2 and half of them remained. Chogha Zanbil was one of the first historical sites in Iran to be recorded in the World Heritage List. Some of the fascinations of this landmark are Elamite writings on 5000 bricks of the temple, the interesting water supply system, and the ancient observatory.

Stars valley is a geologic feature in the southeast of Qeshm island near the Burka Khalaf village. Erosion has formed this valley since 2 million years ago, but native people believe that a star formed the valley by striking the Earth. They also believe that elves and ghosts live in this valley because of the sounds that winds make during nights. The stars valley is the only feature of its type that exists in Asia. The best time to visit Qeshm island and the valley of the stars is in the winter and beginning of the spring.

This system is an attached complex of water mills, waterfalls, canals, and tunnels in Khuzestan province, in the Shushtar city. I was built and developed for directing the water flow in the Achaemenid, 500 BC, and Sasanid era, 300 BC. Madam Jane Dieulafoy, the French archaeologist, refer to this system as the biggest industrial complex before the industrial revolution. If you have decided to visit Chogha Zanbil ziggurat, don’t forget to put this place in your plan too. 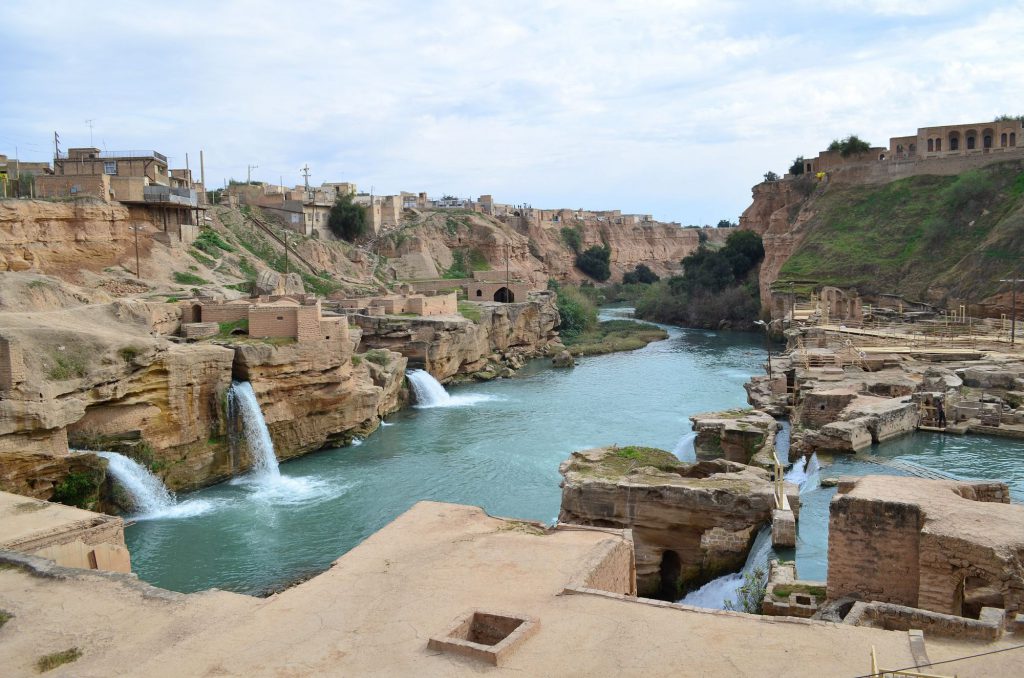 Uraman is a highland region in the Kurdistan and Kermanshah province close to Iran-Iraq border. It includes many different villages with natural and historical importance. The villages’ architecture and its adaptation to the mountains make the view of this region spectacular. One of the most famous villages is Uraman Takht located on a steep slope of a mountain facing another mountain. The houses of Uraman Takht are built on the top of each other with a stairway form. Best time to visit this region is in the spring when nature shows you its magic.

This square is an important historical site situated at the centre of Isfahan city. It contains four historical buildings from the Safavid era, 16th and 17th century, which are Ali Qapu palace, Shah mosque, Sheikh Lotf Allah mosque, and Keisaria gate that opens to Isfahan grand bazaar. There are many shops in this square and the grand bazaar selling Isfahan’s handicrafts and souvenirs. Naghsh-e Jahan square is one of the most beautiful places in Iran and one of the biggest squares in the world. The best time to visit Isfahan and Naghsh-e Jahan is in the spring.

Masal is a city with unique natural features in the highlands near Talesh mountains in Mazandaran province. It is surrounded by mountains, jungles, caves, and waterfalls. So if you’re a nature lover and you need a couple of days to relax in a silent beautiful place Masal in one of your best choices in Iran. The best time to visit this city is the end of summer because of the mild weather.

Nasir al-Mulk a unique mosque in Shiraz, close to Shah Cheragh mosque. A lot of colourful glasses are used to decorate the windows, and the walls and ceilings are covered with colourful tiles. It is also called “the pink mosque” because of the usage of pink colour tiles for its interior design. Nasir al-Mulk mosque is definitely one of the most beautiful places in Iran built during the Qajar era, from 1876 to 1888. The best time to visit Shiraz and Nasir al-Mulk is spring and fall.

The Dasht-e Kavir is a very large desert in the centre of Iranian plateau partitioned between the provinces of Khorasan, Semnan, Tehran, Isfahan, and Yazd. It is Earth’s 26th largest desert with a total surface area of 77600 sq km (30000 sq mi). one of the beautiful features of this desert is the salt lake in the west which contains large salt plates in a mosaic-like shape. Silence and spectacular night sky are other positive points of this region. The best time for visiting this desert is summer if you want to stay overnight.

There are many different palaces in Tehran built in Qajar and Pahlavi era such as Saad Abad palace, Saltanat Abad palace, Sahebgharanie palace, Niavaran palace, etc. One of the most beautiful palaces in Tehran is Golestan palace which consists of gardens, royal buildings, and collection of Iranian crafts and European presents from the 18th and 19th centuries. Most of the buildings of this complex were built during the Qajar era with some fascinating architectural features. So if by any chance you’re passing through the capital don’t forget to check out this palace.