Persian Traditional Music: An Introduction to the History and Types

The history of Persian Traditional Music

Musical development in Iran dates back centuries. Though there’s not much known about the traditional music of the Achaemenid Empire, Alexander the Great is said to have witnessed many melodies and instruments upon his invasions.

Compared to the earlier periods, the history of music in the Sasanian kingdom is well-documented. Barbad, a highly celebrated poet-musician of the court, is said to be the first to invent the musical tradition that was to transform into the forms of dastgah and maqam. He might have also invented the lute. 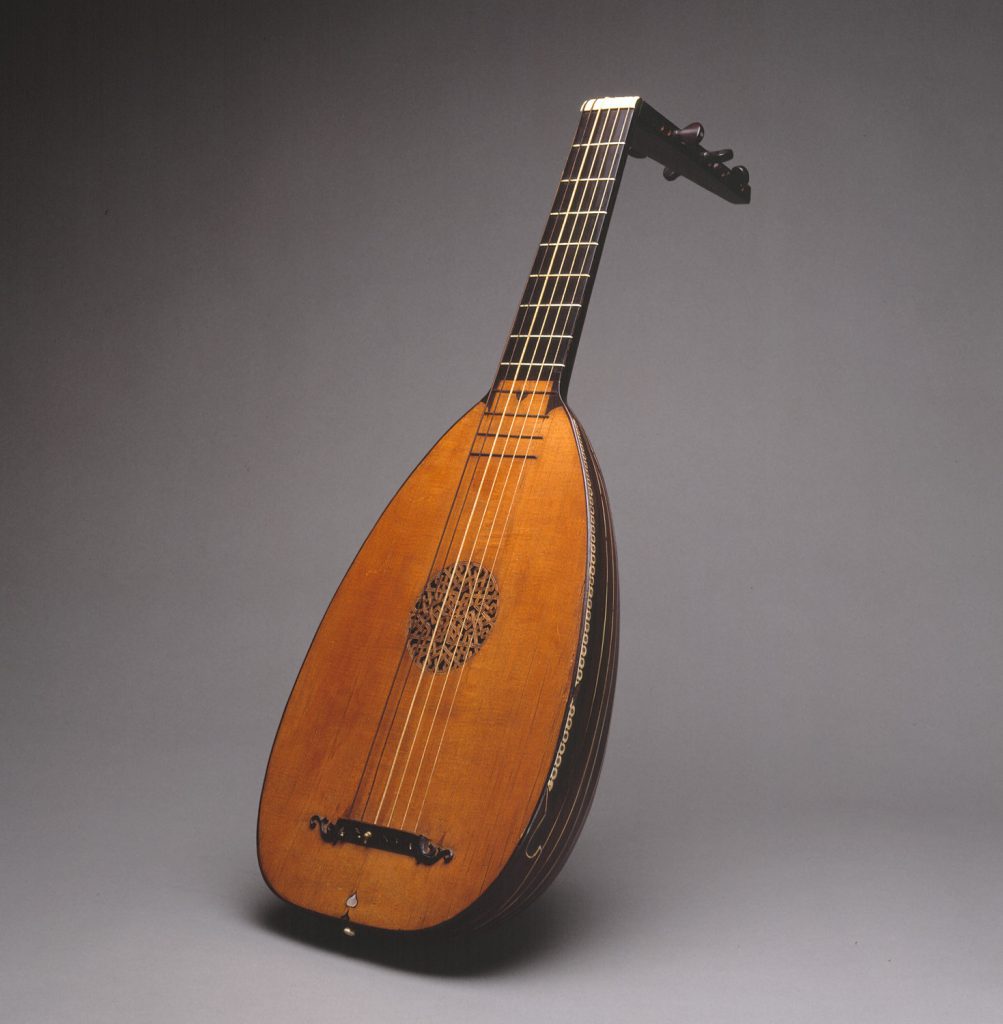 A lute is a string instrument with a neck and a deep round back enclosing a hollow cavity, usually with a sound hole in the body.

In the time of the Achaemenids (550-320 BCE), music has played a big role in worship as well as in courtly entertainment.

Groups of singers, players of trigonal harps (Chang), accompanied by large tambourines, as well as long-necked lutes and double-flutes are clearly depicted in bas-reliefs from the period.

The first written evidence of Persian music goes back to the Sasanian Period (226-643 CE). Barbad, the most famous court musician of Khosrau II, was said to have developed a musical system with seven modal structures known as the Royal Modes (xosrovāni), thirty derivative modes (navā), and 365 melodies (dāstān), associated with the days of the week, month and year.

The Arrival of Islam

With the advent of Islam in the 7th century A.D., as well as other Persian cultural elements, Persian music became a formative element in what has since become “Islamic civilization”. Persian musicologists and musicians overwhelmingly ruled the musical life of the Eastern Islamic Empire.

Nasser al-Din Shah, the 19th century Qajar King was a great patron of music. Many great musicians including Mirza Abdollah Farahani have been sponsored during his kingdom.

Mirza Farahani organized and collated the traditions of Persian music to form the basis of contemporary Persian traditional music known as Radif.

As a process of Westernization began in 1862, Nasser al-Din Shah ordered the establishment of a military band, such as he had seen in Europe. The court hired a French musician, Alfred Lemair, to run a traditional ensemble of indigenous shawms, trumpets, horns, and percussion into a Western concert band. Lemair drew so many people’s attention to Western music that by the end of the 19th century, the music school in Tehran taught Western instruments and music theory.

With the accession of the Pahlavi dynasty in 1925 Westernization accelerated. The National School of Music and the Tehran music school (now a full-grown conservatoire) were both state-funded.

By the end of the 1930s, composers from Iran started to study abroad and to compose in nationalist and modernist styles.

During the 1970s, the newly built concert halls in Tehran were hosting artists from all over the world, and Iran’s national television introduced Western music to the people. Since pop, rock, jazz, and Latin American music became popular in Iran, the record and cassette industry started to market local pop music and hybrid love-songs that blended Persian modes with Western harmony. 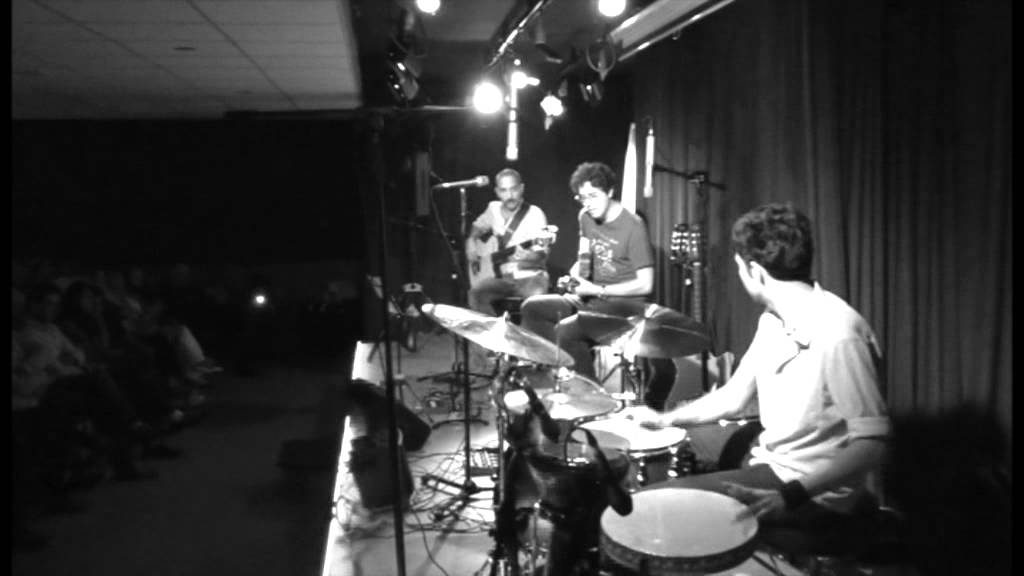 Jazz made its way into Iran, along with a host of other foreign influences, during the 1960s.

Iran’s classical music relies on both composition and improvisation and is based on a series of modal scales and tunes that must be memorized.

The common repertoire comprises more than 200 short melodic motions (gusheh). These motions are classified into seven modes or dastgāh. Each dastgah and gusheh has an individual name. Secondary modes called āvāz are branching from two of these modes.

Tar is an Iranian long-necked stringed instrument that is played in many cultures and countries including Iran, Azerbaijan, Armenia, and central Asia (like Tajikistan). 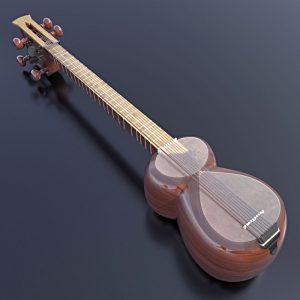 The body is a double-bowl shape carved from mulberry wood, with a thin membrane of stretched lamb-skin covering the top.

Tonbak is the most popular percussion instrument in Persian music today. This goblet drum is also known as Dombak, Tompak, and Zarb. The Tonbak is a large instrument made of wood with a goatskin head. Due to its size, this drum produces lower-pitched and softer tones.

The two main strokes played on this drum are known as Bak, for a treble tone played on or near the rim, and Ton, for a bass tone played in the center of the drum head. Now it makes sense why it’s called Ton-Bak! 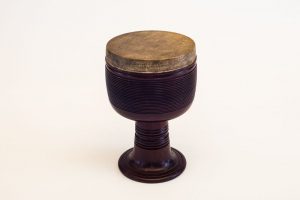 Tonbak is considered the principal percussion instrument of Persian music.

The santoor is a trapezoid-shaped hammered dulcimer. There are 72 strings in a Santoor, arranged in groups of four, and each of four closely spaced strings is tuned to the same pitch. There are two small rosettes on the top panel of a Santur, which help to amplify the sound and several sound posts inside the box.

Santoor is played in Egypt, India, Iraq, and some other countries. 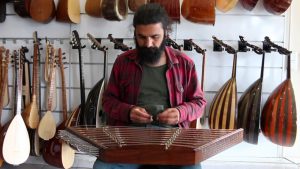 The Persian santur is played with a pair of lightweight wooden mallets that are held between the thumb, index, and middle fingers.

Setar, literally translated as three-stringed, can be traced to the ancient tanbur of pre-Islamic Persia and has actually got four strings!

It is the preferred instrument of Sufi mystics, made from thin mulberry wood and its fingerboard has twenty-five or twenty-six adjustable gut frets. 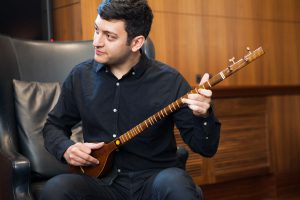 Setar or Sitar is a member of the lute family, which is played with the index finger of the right hand.

As one of the most ancient frame drums in Asia and North Africa, in the 20th century, Daf is considered as a Sufi instrument to be played during rituals. 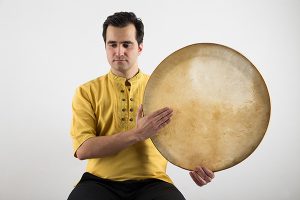 The frame is usually made of hardwood with many metal ringlets attached, and the membrane is usually fish skin but other skin types such as cow, goat, and horse are used. 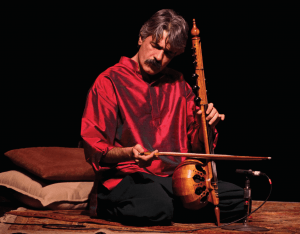 Persian Traditional Music: Kayhan Kalhor, one of the world’s best Kamancheh players, playing the strings with a variable-tension bow.

The kamancheh is an Iranian bowed string instrument, also played in Armenia, Azerbaijan, and Turkey. The instrument is extremely ornate and is almost as big as a viola. This bowed spike fiddle has been painted in many Persian antique paintings.

MahCard is an Iranian prepaid debit card designed for tourists and temporary visitors. You can instantly add funds to your card, in your preferred currency and convert it to Iranian Rial (IRR). All the restaurants and Cafes accept Mahcard debit card all over the country and you can easily use it for all your daily payments without worrying about carrying Cash money with you. You can also pay Persian Traditional Music Concerts tickets, using Machcard.