Alcohol in Iran: A Complete Guide to Iran’s Drinking Policy for Tourists

alcohol in iran for tourists

Even though wine has played an important role in Persian culture and literature throughout history since the establishment of the Islamic republic government in 1979 alcohol has been banned in the country.
Iran’s constitution is based on Islam religion which means it is illegal for Iran’s citizens to produce, buy or sell alcoholic drinks in this country unless they are not Muslims. If you’ve got any questions about Alcohol in Iran, that is exactly what this blog post is all about.

Is Alcohol illegal in Iran?

As you already know, Iran is one of the countries where alcohol is illegal. Therefore, it cannot be served in hotels, restaurants, and cafes. So if you are looking for bars in Iran, we’re sorry to let you down.

Is alcohol available in Iran?

The prohibition of alcoholic drinks has caused the black market to produce and sell alcohol in this country, but in addition to the legal troubles, it can get you in, drinking fake alcohol can lead to serious health conditions.

Fake alcohol refers to the alcohol produced in unlicensed distilleries or people’s homes which plays an important role in Iran’s black market.

Drinking alcohol that contains chemicals like methanol and isopropanol can cause nausea and vomiting, abdominal pain, drowsiness, and dizziness. These substitutes may have similar effects to ethanol and make you feel tipsy, but they can also lead to liver or kidney problems and even coma. Methanol, a chemical that could be used in fake vodka might cause permanent blindness.

Can I bring alcohol to Iran?

Since your luggage will be checked by X-ray at the airport, you better not. Bringing alcohol into the country is strictly forbidden and liquor chocolates are not an exception!

It is illegal to bring or even carry alcohol as long as you are in the Islamic Republic of Iran.

Who can purchase and use alcoholic drinks in Iran?

Even though alcohol is banned and there are no liquor stores in the country, there are still ways for non-muslim citizens and tourists to provide alcoholic drinks. Tourists may be able to purchase from ethnic minorities (particularly Armenians). Armenians are living in Iran for many centuries since the Persian Empire was established. Iran’s capital, Tehran is home to the most important Armenian community in the country.

Non-Muslim citizens are granted limited permission to produce alcohol for consumption within their community. Since alcohol is banned in Islam, as a Christian community, Armenians are allowed to drink alcohol in private places. It’s not suggested to follow this.

Should I give up visiting Iran?

Even though alcoholic drinks were banned after the Iranian revolution, there are many soft drinks that you should try when traveling to Iran. Chayi (Persian tea), Sharbat, Dough (Yogurt drink), various juices and smoothies are being served all around the country. Have a sip and you will love Persian drinks!

Sharbat is an Iranian cold beverage that is mostly used through summer to quench your thirst in seconds. Sharbat comes in different flavors such as Sekanjabin, Tokhm Sharbati (Basil seeds), Khakshir, Zaferan (Saffron), etc.

You can find these refreshing drinks in juice shops all around the city. They come in big plastic glasses and treat your dehydration right away!

These traditional Persian drinks are also served in cafes if you’d like to spend some time lingering in a coffee shop after having your drink you can simply go to one and look through their cold bar menu.

Sharbat Khaneh, literally meaning The place for Sharbat; is a traditional type of cafe in Iran that serves various Sharbats in different flavors. These special places are mostly based in Isfahan and Shiraz, historical cities in the mid parts of the country. 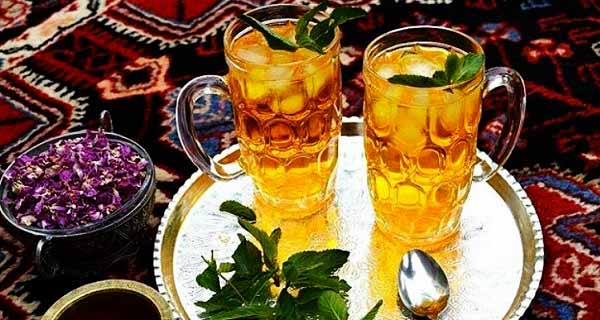 Doogh is a tasty drink made of diluted yogurt, cold water, and aromatic herbs. Historians believe this traditional drink has been consumed since Iran’s ancient times and then spread through the region. That’s why it’s also called Ayran in Turkish or Tan in Armenian.

This aromatic traditional drink has got a sour taste and is usually served during lunch and dinner especially next to Kabab and Dizi. Doogh is a good source of Calcium and B group vitamins, but one thing you have to know about this Persian drink is that it gets you sleepy.

Tea is the national drink of Iran. It doesn’t matter how hot the weather is, Iranian people have tea several times a day. It’s an important part of Persian breakfast and is also used as a home remedy for stomach ache. You can also visit Iran’s traditional tea houses. Coffee houses and tea houses are an important part of Iran’s cultural heritage. Regardless of their title, coffee houses mainly offer tea, Iran’s most popular drink

Iranian people are also a big fan of Damnoosh (Herbal tea) and sometimes brew a mixture of tea and other aromatic herbs. Persians drink tea with sweets like sugar cubes, Nabat, Baklava, Halva and so on.

MahCard is an Iranian prepaid debit card designed for tourists and temporary visitors. You can instantly add funds to your card, in your preferred currency and convert it to Iranian Rial (IRR). All the restaurants and Cafes accept Mahcard debit card all over the country and you can easily use it for all your daily payments without worrying about carrying Cash money with you.