Calling all digital nomads- Iran is waiting for you

Backpacking in Iran? Its a real ride. Don’t know what to expect? Well, expect the unexpected. Iran is quite unpredictable… but in a good way!

I first travelled to Iran as a backpacker in 2016. Since then, the tourism industry has grown a lot and this is why Iran is often described as an “emerging destination”. New hostels, ecolodges and experiences aimed at international tourists come daily.

There are three things that I distinctly remember from my first trip to Iran. The first was the friendliness and generosity of the locals. The second was that the local currency was hella confusing. And the third thing was that I knew I had to return.

In this post I’ve complied a short guide to backpacking in Iran. I cover off a few of the basics and suggest a handful of tried and tested hostels. 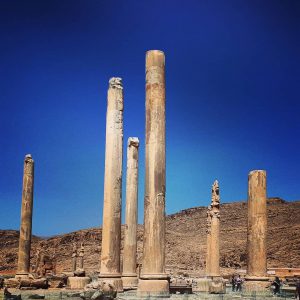 Persepolis, Iran. With over 6000 years of continuous history, Iran is sure to captivate travellers

Where to go in Iran

A lot of tourists follow the same path from Tehran through Kashan and Isfahan in Central Iran, down to Shiraz and loop back to Tehran via the desert city of Yazd. This is a common route because it is gives a snapshot of Iran focusing on historical sites, archaeological ruins, Islamic architecture, palaces, gardens and Silk Road bazaars. This trip can be done in a week if you really hurry or 10-14 days comfortably. This itinerary allows you to see the quintessential Iranian sights.

Of course these popular places are just the beginning. Iran is a vast country (about 6 times the size of the UK) stretching coast to coast in the Middle East. Tourists will generally be given a 30 day tourist visa (which can be extended) so if you’ve got the time, use the full 30 days.

The North is a popular holiday spot for locals and tourists alike. Provinces of Mazandaran and Gilan are on the Caspian Coast and can be reached in 4 hours from Tehran. Unlike Central Iran, Northern Iran is forested, lush and cool most of the year. Here you can visit ancient castles, lotus lagoons, tea plantations or go hiking through the forests.

Heading to the Southern coast you will see another side of Iran. Unfathomably hot during the summer months, the Persian Gulf is best enjoyed between October and March. Mainland Iran’s coastline is picturesque itself and so are the islands. Kish, Qeshm and Hormoz are the three popular ones for tourists. The coral island of Kish offers luxury resort style travel but if you’re looking good diving, crazy rock formations and salt caves, go to Qeshm or Hormoz.

For hostels in these places, check out my top picks below. 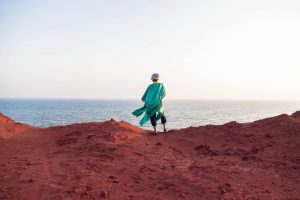 Is Iran safe for backpackers and solo travellers?

First things first. In today’s heated political climate, is Iran safe to travel as an international tourist? In my opinion, 100% yes.

All international tourists should know that Iranians absolutely love foreigners. Like love, love. Even though the dominant dialogue in the international press portrays Iran as a nation of psychos, this is really not true. Generally, crime rates are low and violent crimes against tourists are virtually unheard of. So solo travel is pretty safe.

In my experience Iranians are extremely educated, kind people. Sure, there are cultural differences, for example women must wear hijab in public and there aren’t any bars, but overall Iranian people are very relatable and share many customs and morals with Europeans. Ladies should know that they will may attract quite a bit of attention, especially in the big cities where the guys are more outspoken. But most of the time locals just want to ask you where you are from and show off their English language skills.

Most governments advise their nationals to exercise caution in Iran and avoid Iran’s border areas (Afghanistan, Pakistan, Iraq borders). This is the case because unfortunately neighbouring countries are not as safe for tourists as Iran.

As I already mentioned, the local currency in Iran is very confusing! Although things are very inexpensive, inflation has been out of control for many years now so you pay 30,000 Iranian Rial (IRR) for a can of Coca Cola. So as you can imagine, it is pretty easy to make purchases in the millions.

To simplify/convolute the issue, Iranians have developed another level of currency – the Toman. Some prices will be in Toman, others in Rial. Sometimes people also just drop the last 3 or 4 zeros. So the price of the can of coke can be 30,000 Rial, 3,000 Toman or 3 Toman. Confused already? 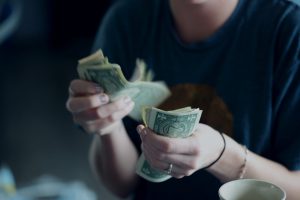 Stressed about carrying cash in Iran? Order your MahCard today!

Importantly, Iran is not connected to international banks. This means that travellers must either carry cash or arrange

MahCard is Iran’s leading debit card provider for international tourists. With competitive exchange rates and a user friendly app to keep track of your purchases, MahCard eases your money woes in Iran. It sure saves fumbling with cash trying to work out all the zeros! Click here to apply for your MahCard Iranian debit card.

Are there hostels in Iran?

Although Iran is an Islamic country, hostels are allowed. Sometimes hostels and hotels will be a bit funny about couples or groups of men and women who aren’t married but other places have mixed dorms… so the rules are not clear.

Some hostels will have wifi but its not a given.  You can order a pocket wifi from MahCard so you’re always connected. Visit the website to find out more.

How much do hostels in Iran cost?

Hostels in Iran are really cheap. In 2018 the Iranian currency, the Iranian Rial, lost a lot of its value due to economic sanctions applied by the Trump administration. This means that in 2019 everything is very affordable for international tourists.

For an actual estimation of per night costs, read on. 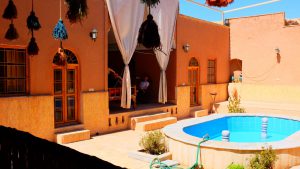 These are my top picks for hostels in Iran. I’ve chosen these ones because together they are a good mix of traditional and modern, city and village, and well established and up-and coming.

Stay in a treehouse and venture into the rice paddies at Gileboom Homestay in Gilan, Iran

Mah Card is an Iranian prepaid debit card designed for tourists and temporary visitors. You can instantly add funds to your card, in your preferred currency and convert it to Iranian Rial.

Pre-order through the website and get it delivered direct to your accommodation in Iran.

Keep track of your spending via the app and pay like a local! For more information visit https://www.mahcard.com/.

Alison is an Australian writer and artist. After falling in love with Iran during a holiday, she decided to stay. Alison now lives between Tehran and her walnut farm near Isfahan. Alison has travelled widely across Iran, including a mammoth 3,000 kilometer road trip from Tehran to the Persian Gulf in February 2019. She loves exploring Iran’s wilder areas like the forests of Gilan and the Grand Bazaar of Tehran!