Over the past few years, Iran has continually been listed as one of the top destinations to visit worldwide. This year, it once again made the list as part of The New York Times’ “52 Places to Go in 2019”. And it’s with good reason. Iran not only has ancient history, spectacular architecture, and breathtaking natural beauty, it also boasts an impressive 24 UNESCO World Heritage Sites. You might think that at a time when Iran-US tensions are high, it’s not wise to visit Iran, but we’d argue that’s exactly the reason why it’s now more crucial than ever to witness this misunderstood country with your own eyes and discover the truth behind the misinformation. While there are countless reasons to see Iran, we’ve narrowed down our case to the top five.

As home to one of the oldest civilizations, Iran is steeped in ancient history, making it a must-visit for any history buff. People tend to associate Iran with the Persian Empire (550-330 BC), which was founded by Cyrus the Great and includes impressive sites such as Persepolis, Pasargadae, and Naqsh-e Rostam near present-day Shiraz. And while Persian history largely stems from this period, there are a number of lesser-known civilizations that actually pre-date these sites and are well-worth a visit. One of Iran’s prehistoric archeological sites, Tepe Sialk in Kashan, dates back some 7,500 years. Susa, an important city in the Near East circa 4200 BC, is listed as a UNESCO World Heritage Site. The Elamite ziggurat of Chogha Zanbil in Khuzestan province was founded in 1250 BC and even preserves an ancient footprint on the premises. Finally, founded in 678 BC, Ecbatana in present-day Hamedan once served as the capital of Media, a region in northwestern Iran. 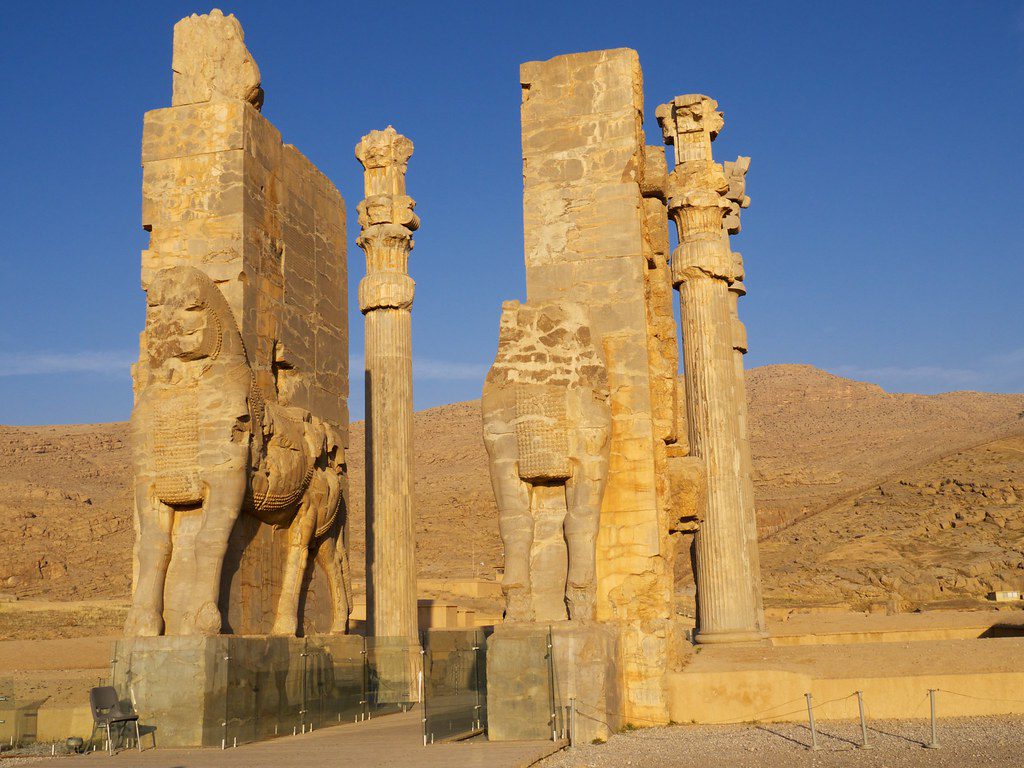 If architecture is more your thing, then you’re in for a real treat! Whether you’re running around on the rooftops of Yazd, marveling at the dizzying domes in Esfahan, or catching inspiration at every turn in Kashan’s historical mansions, you won’t leave Iran without some major sparks of design ideas. The rich colors, traditional calligraphy, and attention to detail and aesthetics that adorn the walls and ceilings of mosques, palaces, and bazaars are absolutely enchanting and reflect the dynasty from which they stem. It may be these older structures that attract most visitors, but you’ll also want to check out some of the modern constructions in major cities like Tehran that will no doubt leave you awe-struck in a different way. 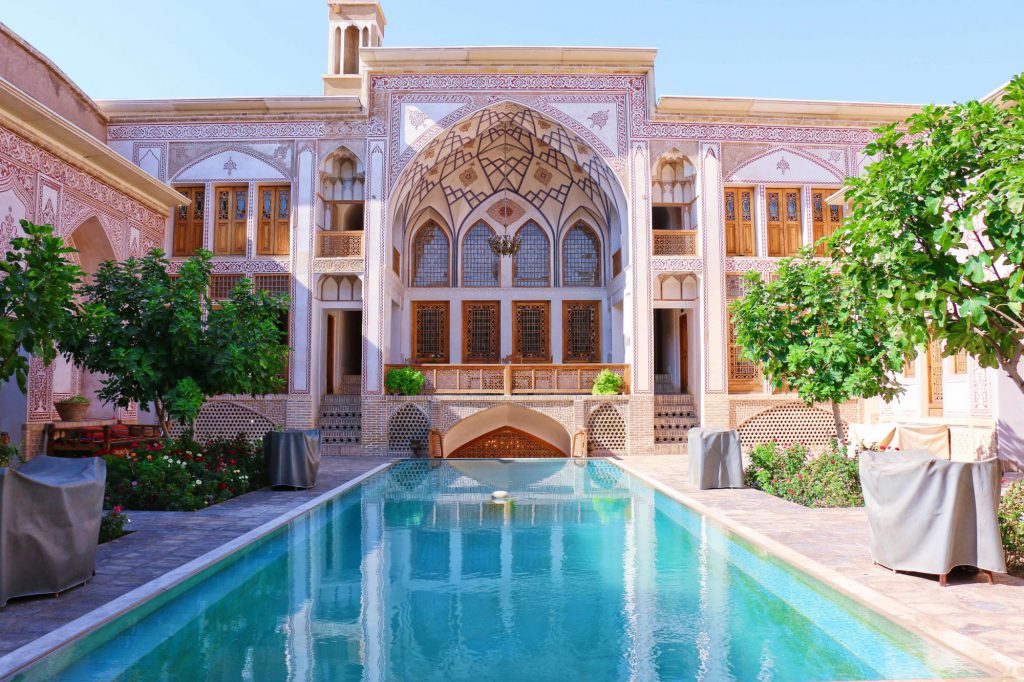 Historical house in Kashan | Photo by Morteza Shojaei on Unsplash

One of the most unique aspects of Iran is that it is incredibly culturally and ethnically diverse. Each region has its own local culture, traditions, and language or dialect, so you can expect something new in every place. Even Iranians who travel domestically aren’t immune to a bout of culture shock! There is the Azeri-Turkish speaking population in the northwest, Kurdish speakers in Kurdistan province, the Armenians in Tehran, Esfahan, and elsewhere, and the Arab populations in the port cities and islands. Nomadic tribes such as the Qashqai, Bakhtiari, and Shahsevan continue to live according to tradition and follow their migration routes with the changing of seasons. You’ll be intrigued to find that all of these diverse people and cultures make up the collective Iranian identity. 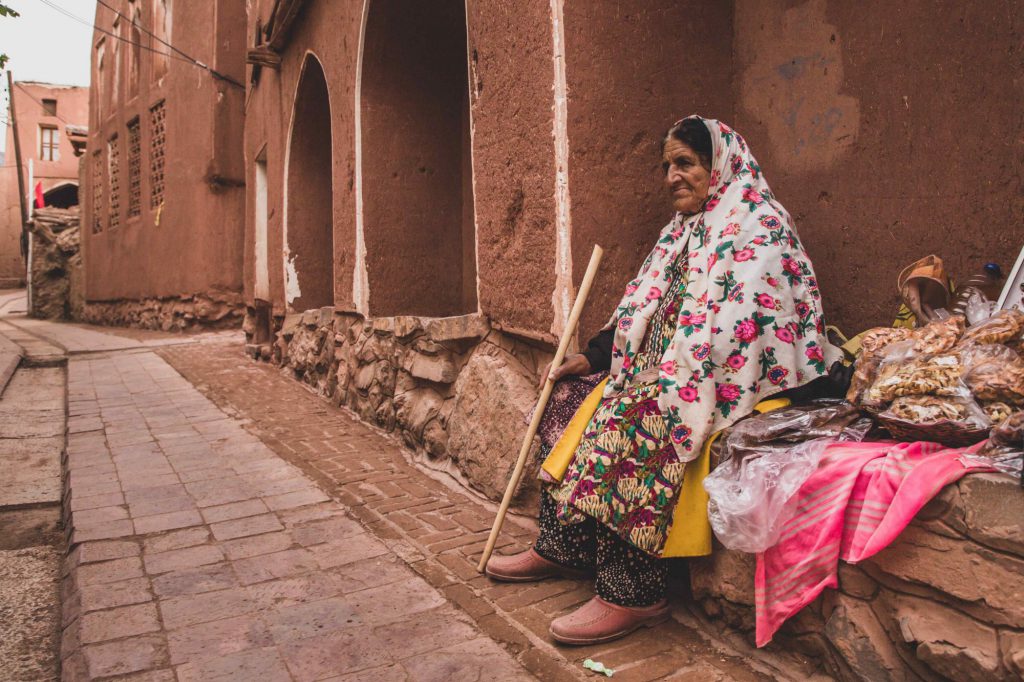 If you thought Iran was all desert, think again. In fact, Iranians are proud to say that you can enjoy world-class skiing in Tehran before hopping on a plane and swimming in the warm waters of the Persian Gulf in under 2 hours. From thick forests to sandy beaches, natural hot springs to cascading waterfalls, water caves to pink lakes, Iran’s landscapes are about varied as its ethnic diversity.

Among the natural beauties you can’t miss are the islands of Qeshm and Hormuz which contain a world of some of the most unspoiled and mysterious natural wonders around. The lush Hyrcanian Forests, newly added to Iran’s natural UNESCO-listed sites, contains diverse flora and fauna. Hikers and mountaineers can add Mt. Damavand (the symbol of Iran), Alam-Kuh, or Sabalan (the country’s first, second, and third highest peaks, respectively) to their resumes. The more adventurous can even scale Mt. Bisotun, a 1200-m beast of vertical rock that is said to be one of the most challenging walls in the world. 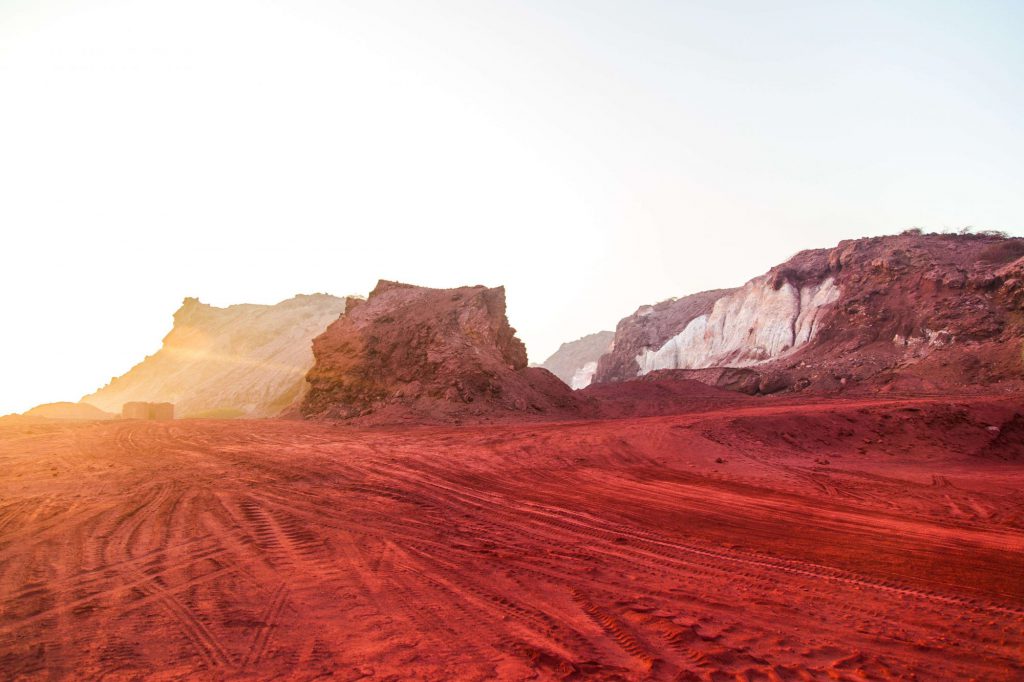 Foodies take note because if you like to experience countries through your belly, then Iran won’t disappoint by any means. And contrary to popular belief, the cuisine here is not just about kebabs and rice (although there’s a reason that it’s the national dish). There are countless other fragrant dishes that expertly blend a medley of herbs and spices and other local flavors to make your taste buds come alive. You can easily eat your way from city to city with traditional dishes such as fesenjoon (a tangy pomegranate-walnut stew), ghormeh sabzi (herb and kidney bean stew), and dizi (meat, potatoes, and beans cooked in a clay pot) to local specialities such as mirza ghasemi (a smoked eggplant and tomato spread) in the north, beryani (minced mutton with spices) which is the pride of Esfahan, and kufteh (giant, stuffed meatballs) which are the delicacy of Tabriz.

If you’ve got a sweet tooth, try the national favorites such as saffron and rose water ice cream and faloodeh (semi-frozen rice noodles soaking in syrup and rose water). Gaz (Persian nougat with pistachio) from Esfahan and sohan (saffron brittle) from Qom are among other treats that you can both enjoy in Iran and take back home! 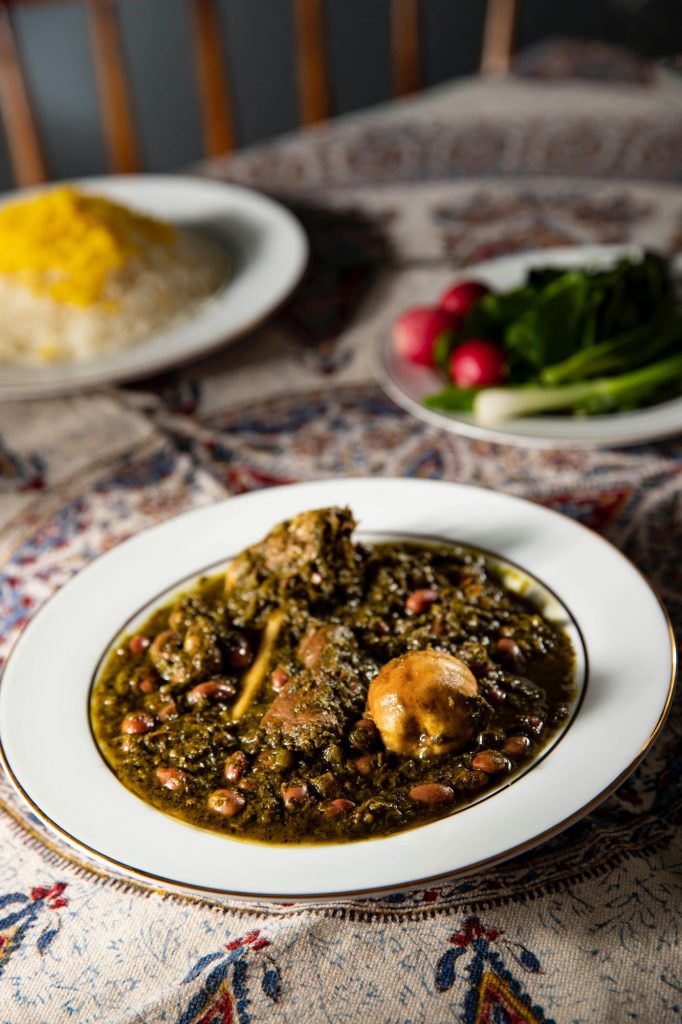 Form your own opinion

While all of these reasons make a pretty strong case, we think that by far the most urgent reason to visit Iran is to see it for yourself and develop your own opinion. Over the past four decades, mass media has been less than kind in terms of the image of Iran they have portrayed globally. They’ve depicted Iran as an unsafe destination with people who hate westerners, both of which could not be further from the truth and have led to a great deal of misinformation. Only in recent years has the negativity clouding Iran somewhat lifted, and that’s largely due to the influence of social media. Using these channels, Iranians have been able to spread a more positive, truthful image of their country which in turn has helped bring in an influx of curious tourists who want to experience Iran for themselves. Even though it’s still with a certain degree of trepidation that they enter the country, it doesn’t take them long to realize that Iran is actually one of the safest nations. There’s virtually no violent crime, and petty theft is rare. But if you read these visitors’ stories, they’ll tell you that it’s by and large the Iranian people and their warm hospitality that not only leave the most lasting impression but also have them planning their next visit even before the current one is over. We’re sure that if you give Iran a chance, it will turn into your most eye-opening and unforgettable travel experience, too. 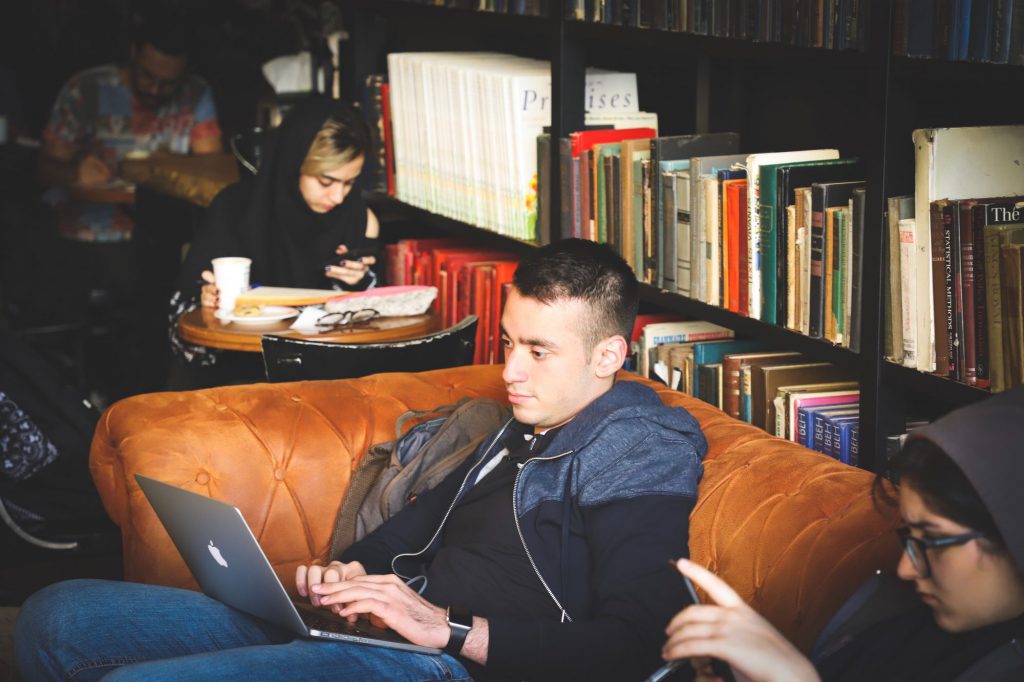 Young Iranians in a cafe | Photo by Alireza Attari on Unsplash

Born and raised in the US, Pontia lived in four countries before moving to Tehran, where she has been living for 5 years. She’s passionate about languages, culture, and travel. Determined to dispel any misconceptions about her adopted home, she regularly blogs about life as an expat in Iran and Persian culture/language on her personal blog MyPersianCorner.com. When she isn’t writing, she’s either teaching languages (or picking up a new one herself) or traveling.